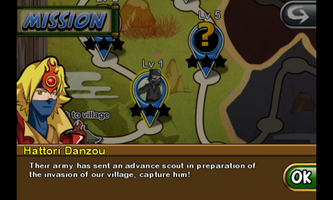 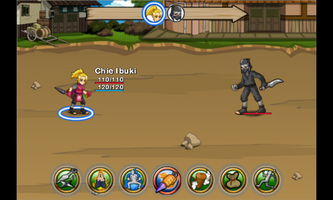 Advertisement
Ninja Saga is a social ninja game, in which players create their own ninja who lives in a warrior community and fights enemies controlled by artificial intelligence or other players.

At the beginning of the game, players choose a name for their character, and its appearance from among 5 options. You also have to choose your two main magic skills that will allow you to cast magic spells.

Once you have chosen your character, you can start enjoying everything that Ninja Saga has to offer. You can train against other players, participate in missions in order to win money and experience, upgrade your character's abilities, or even get pets that will help you in different ways.

Ninja Saga's battles are taken in turns. As a result, players have time to chose what type of attack they want for each assault by choosing between different defenses, attacks or magic spells.

Ninja Saga is a social game with RPG components, in which players can enjoy an experience very similar to the one from the Naruto universe. Pretty much all of the game's concepts are directly inspired by the popular anime.
Reviewed by Andrés López

I remember playing this game back when it was still on Facebook and I wanted to play it again but after I installed it it goes to a download that wont even move its always staying at 0.00%

The latest version does not download the 90MB of data, and neither does the older version connect anything. Can someone help me?

When they continue updating it, there is a lot of potential in the game, it's a shame that they leave it like that ????

Good Game and Update the Game, Love it

NinJump
Climb as high as you can
Devil Ninja 2 Mission
Ninjas, demons, werewolves, and lots of action
Ninja Run
No one runs and throws shurikens faster than a ninja
Shadow Blade
Ninjas, platforms and a lot of blood
Clumsy Ninja
A virtual ninja living on your Android device
Shadow Fight 2
Spectacular battles in feudal Japan
Ninja UP!
Help this ninja get as high as he can
Spring Ninja
Jumping from platform to platform is not as easy as it seems

Sudoku
Solve classic sudoku puzzles on your smartphone
Puzzle Wings
Join three or more pieces in this match-3
Caesars Slots
Slot machines with a lot of history
Johnny Trigger: Sniper
Use your trusty rifle to finish off your enemies and save the day
Bubble Shooter
Pop the bubbles in this game of combinations
RoyalDice
SavannaRace
Snake Zone.io
A modern twist on the classic snake game